The population of New Zealand as of 2017 is 4,604,871, and density is 18 per square kilometer. The top five population centers in New Zealand as of 2013 are Auckland, Christchurch, Wellington, Hamilton, and Dunedin. In 2013, there were 1,415,550 people in Auckland, 341,469 in Christchurch, 190,956 in Wellington, 141,615 in Hamilton, and 120,246 in Dunedin. Auckland was the fastest growing region in 2013 increasing by 8.5%. It is located in the North Island, and the largest city in New Zealand. It has a role as the hub city for transport. According to New Zealand census in 2013, the ethnic groups are New Zealand European: 59.3%, Pacific Islander: 14.6%, Asian: 23.1%, Maori: 10.7%, Middle Eastern/Latin American/African: 1.9%, and others are 1.2%. The population in Christchurch decreased between 2006 and 2013 because of a magnitude 7.1 earthquake strike. Yet, government statistics shows that people seem to be staying in the Canterbury region, which is where Christchurch is located even after the massive earthquake. Wellington is the capital city of New Zealand. Wellington city is known as the business district and it contains half of the Wellington population. The urban area has low population density of 900 per square kilometer. – Yasuo Fukui

Bus: For buses the companies are Inner City and Naked bus. The Auckland public transport bus is widely used. However, in numerous rural areas, the only option is to drive. Buses are also used between cities(newzealandnow.com).

Air: Of six carriers, the primary carriers are: Air New Zealand, and JetStar with four others. There are 37 other airports with paved runways(cia.gov). Auckland and Wellington are two major New Zealand Airport cities. Travel time between them by air is one hour, or eight hours by ground. Any hazardous materials not suitable for passenger air transport or ferry transport will likely need to be shipped by air freight, or by ocean vessel. This adds additional risk, costs, and delays when shipping goods or equipment.

Car: Many car rental companies are available at or near airports. Travel is on the left side of the road and not on the right. Many travelers not familiar with this may not have international driver’s license. They also may choose not to drive thereby limiting in and around travel. Vehicle Insurance is not required(newzealandnow.gov). Some visitors may choose not to drive due to the added risk.  Historically, travelers often underestimate travel times on the roads (nzta.govt.nz). This will cause added expenses managing restaurant seating goals and availability. There will be added risk as travelers missing dinner reservation times will occur at higher frequency and reduce seating rates.
Highways: There is a State highway system on both Islands, but mostly only have two lanes. This can cause congestion which at times can be very severe. Generally, there is only light traffic volume. Delays are usually due to numerous curves, hills, and number of stone roads (not sealed) 32,143km(cia.gov). Passing lanes are not extensive nor widely used such as in the United States. This will slow travel times and create travel stoppages for many accidents. This may be frustrating to drivers but will occur at higher frequency than in the U.S.. Snow and ice on mountain passes can slow & interrupt movement also which is typically only seen in mountainous states(nzta.govt.nz).

Rail/Ferries:  Ferries & RailBus New Zealand, are commonly used, to include travel between Christchurch and Auckland, and Graymouth to Wellington. Ferries are used for travel between the North and South Islands points at Wellington on the North Island, and Picton on the South Island. Ferries regularly transport cars and people between the North and South Islands. Ferries are Blue Bridge and Interislander via Cook Straight(interislander.co.nz). There are also freight trains such as KiwiRail, and scenic trains which include Coastal Pacific, and the Alpine train TranzAlpine(RailBus New Zealand).
Distance Analysis: The current transportation infrastructure may move slower and experience delays, and they will occur at higher frequency than the U.S.. Moving intrastate through multiple modes also allows many points of failure or delay.  These add increased risk, shipping times, and increased risk for damage and costs to the company. The Geography also adds cost for time, and fuel, and additional delays experienced around mountain passes and curves. Chains are sometimes required on mountain passes which will slow down freight trucks. Any restaurant will need to hire or train a representative which needs to be certified on the preparation and transport of Hazardous materials by air, land, and sea if restaurant will be transporting supplies / equipment. Restrictions for passenger air cargo and cargo on ferries will increase costs of transporting some goods through alternative modes. The Ferry is available 6 times per day with a 92km and three hours travel time(interislander.co.nz). This makes travel slower than if it was a road in the U.S., and depends on favorable waters. The State Highway system may crawl slowly or stop more often compared to the U.S. whenever there is an accident as there are mostly only two lane roads. Since snacks and beverages are served on the scenic rail system, passengers may not be hungry upon arrival at destination. This lowers the number of potential customers, or may reduce the amount of food ordered in restaurants. – Ronald Gloss

New Zealand is located in the Oceania region and has the coordinates of 41 00 S, 174 00 E. This country has a total land area of 264,537 sq. km and 4,301 sq. km of water or a total area of 268,838 sq. km. The land area also includes the following seven islands Antipodes, Auckland, Bounty, Campbell, Chatham, and Kermadec. If you compare New Zealand to the United States then it is about the same size of Colorado. The country has a temperate with sharp regional contrasts. The terrain is a mountainous with large coastal plains. New Zealand has a mean elevation of 388 meters and the highest elevation is the Aoraki-Mount Cook at 3,754 meters. Some of the natural hazards located on the islands are volcanoes, and earthquakes. The lands use in New Zealand is 43.2% of agricultural land, 31.4% of forest, and 25.4% of other land uses. The natural resources found in New Zealand are natural gas, iron ore, sand, coal, hydro-power, gold, and limestone. Some of the current environmental issues are deforestation and soil erosion.   -Alex Gobble

New Zealand is a small island nation located in the south Pacific ocean. Since it is an island, that means that the country contains a very diverse ecosystem. Like every ecosystem, New Zealand faces everyday environmental challenges like the rest of the world. First of all, deforestation is a huge issue within the territory as they have lost 75% of their forests due to land clearance and fires over the past 800 years. Water pollution is also a huge issue within the nation.  A 2009 study tested 300 rivers and streams around the Western world and found the Manawatu River was loaded with the highest gross primary production.  High GPP rates indicate poor ecological health within a territory. Also, hydraulic fracturing AKA “fracking” has also caused much concern due to the mining issues that causes concern to environmentalists. With all these issues being said, there have been many considerations made to help save the ailing environment of New Zealand. Regarding deforestation, the “Resource Management Act” was passed in 1991 allow natural environments a level of legal protection. You now need a permit to log a native tree in New Zealand (NZ Deforestation). Regarding water, a government body named “Fish and Game” had started a dirty dairying campaign to show the effects of water pollution on dairy farming. This campaign resulted in the document created in 2003 known as the “Dairying and Clean Streams Accord.” Also, the management of waste has become more regulated to reduce environmental issues. – David Heffner

New Zealand is an industrialized country, so their communication system are, for the most part, up to date. Information and communication technology plays an important role in a nation’s economic growth and social development. Communication infrastructure refers to the communications system upon which various broadcasting and telecommunication services are operated. This infrastructure is the core component that connects upstream production, such as voice, data, and visual services, with others.

Here is a table of a comparison of some of United States and New Zealand’s communication infrastructure around the year 2000.

As you can see New Zealand held a very high consumer demand for radios then what we Americans are used to. Half of New Zealand homes in 2000 did not have a television set which is a bit surprising, since in our culture here in America most people view television daily.

The telephone system is modern and extensive with 96 percent of New Zealand households having a telephone in 1996. In 2000, about 30 percent of natives also had a cellular phone. As part of the privatization program of the 1980s, the telephone system was sold to a bunch of American companies. Currently, Telecom is the largest operator, but other companies have entered this very lucrative market.

Mobile phone coverage is now available to approximately 97% of the population.

In 1999 there were at least 80 Internet service providers in New Zealand and in the following year over 1 million Internet users; around 52 percent of the population had some sort of Internet access.  – Calvin Songster 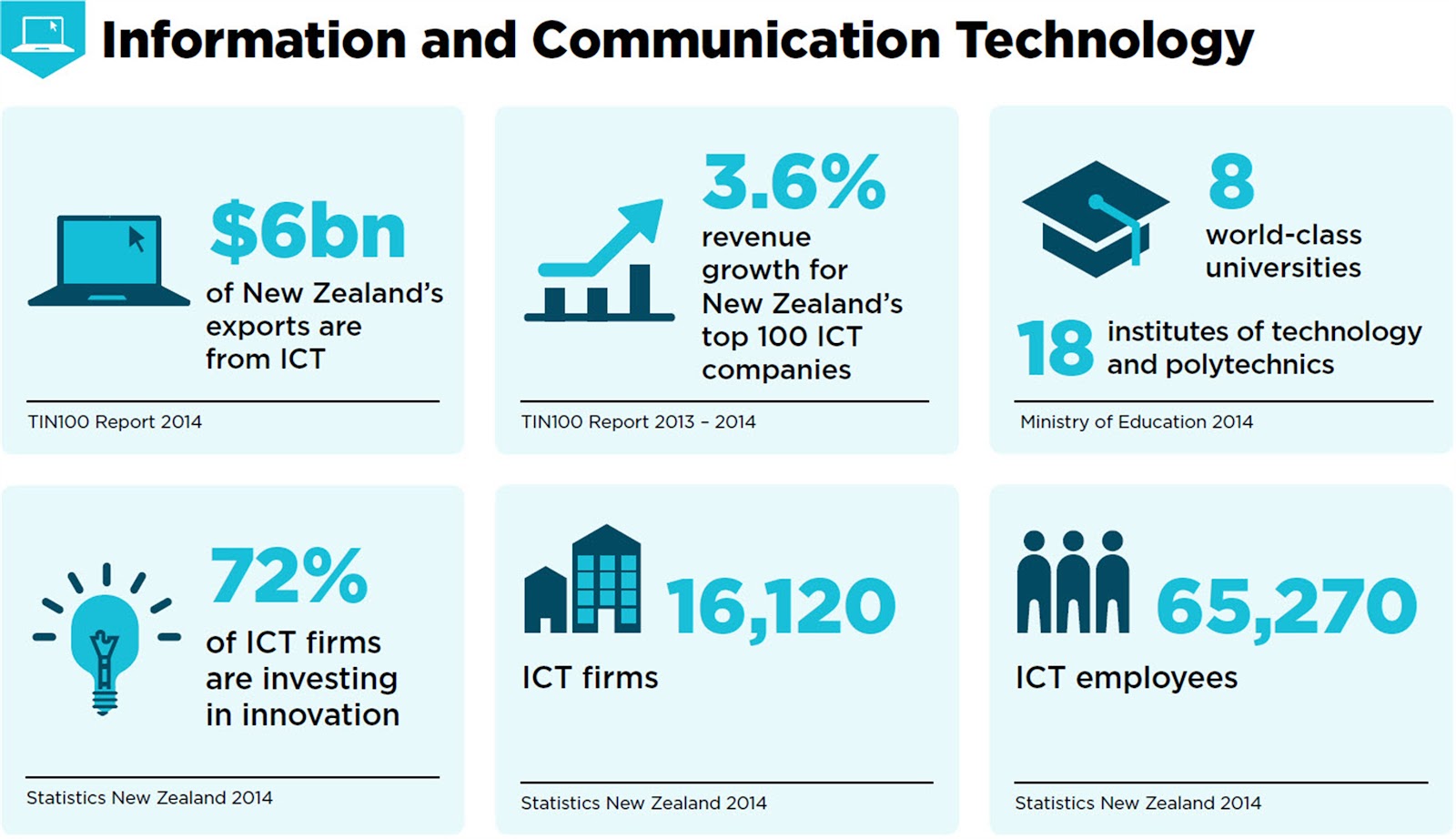 According to the quantitative annual statistics from the Ministry of Transport New Zealand, annual port container volumes at Auckland was 610,822 as a top port, and Tauranga is following by 529,203, and 262,395 at Littelton. Ports of Auckland (POAL) is the council owned company which administers commercial freight and cruise ship harbor facilities at Auckland. It is the largest commercial port in New Zealand which handles more than 20 billion New Zealand dollars of goods per year. It is visited by more than 1,500 commercial vessels per a year. It is located right next to the Auckland’s central business district, the three-quarters of the ports’ inbound cargo is for Auckland. For that reason, they operate 24/7 so that they can deliver goods quickly. -Yasuo Fukui